skip to main | skip to sidebar

The American Library Associations reports that the Library Advocacy Day rally on Capitol Hill was a success thanks to the participation of over 1,600 ALA members and advocates of all ages who braved the 90-degree heat on June 29 to take part in the largest federal advocacy event in ALA history. (About 20 Wisconsin library advocates participated, led by Julie Schneider, WLA's Federal Legislative Advocate and ALA Councilor.)

As library advocates in your states, you represent Americans in every community across this country people who need their libraries, ALA President Camila Alire told the crowd as she opened the rally.

You have all read the headlines about the funding cuts in libraries across the country. You've lived those cuts, Alire said, adding the advocacy day was the ALA's chance to make sure Congress also knew about the needs of our nation's libraries of all kinds.

Alire emphasized the main themes of the advocacy day including increasing Library Services and Technology Act (LSTA) funding to $300 million for FY2011 and including support for school librarians in the upcoming reauthorization of the Elementary Secondary Education Act (ESEA). Pumping up the crowd for their meetings on the Hill following the rally, she led the group with the rally cry, We're going to tell them!

See the complete story with videos and photos of the event!
Posted by Unknown at 1:48 PM No comments: 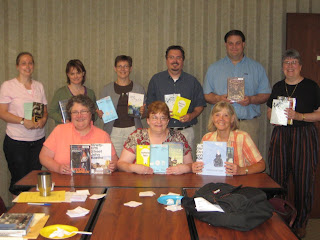 The Literary Awards Committee of the Readers’ Section of the Wisconsin Library Association has chosen Remarkable Creatures: Epic Adventures in the Search for the Origins of Species by Sean Carroll of Madison as the winner of the 2010 Wisconsin Library Association Literary Award, given for the highest literary achievement by a Wisconsin author for a book published in 2009. Remarkable creatures abound as Carroll opens a window into the lives and work of top evolutionary explorers as their adventures pave the way for our understanding of evolution. Remarkable Creatures distinguishes itself in a way very few nonfiction books are able to; it contains an astonishing amount of knowledge and insight into evolutionary sciences while still remaining fast-paced and accessible to the layman. Sean Carroll’s work stands as a wonderful homage to Darwin’s work while bringing us up to the present where we can see how much our understanding of the evolutionary process has changed since those first forays into evolutionary thought.

The Wisconsin Library Association Literary Award is made possible by a grant from the WLA Foundation.

Two authors were chosen for their body of work as Notable Wisconsin Authors. James Magnuson (grew up in a series of small towns in Wisconsin) is the author of multiple fiction titles, including The Hounds of Winter, Windfall, and Ghost Dancing. Kenneth Stampp (born and raised in Milwaukee) is the author of several scholarly titles including The Peculiar Institution: Slavery in the Ante-bellum South and The Era of Reconstruction, 1856-1877.

2010 Outstanding Achievement awards for 2009 publications include the following ten titles by Wisconsin authors. They are:

2010 Outstanding Achievement in Poetry awards for 2009 titles include the following five titles:

Thanks to the 2010 Literary Awards Committee members for meeting the rewarding but difficult challenge of selecting the best Wisconsin authors have to offer. The committee members (pictured above) are: Ellen Jepson (chair), Jean Anderson, Anne Callaghan, Pat Chevis, Caroline Haskin, Brian Kopetsky, Amy Lutzke, Andrew Scott, Deb Shapiro, and Cece Wiltzius.
Posted by Unknown at 11:22 AM No comments:

The Summer 2010 issue of Communique, the newsletter of WAPL (the Wisconsin Association of Public Libraries) is now available at http://www.wla.lib.wi.us/wapl/communique/77.pdf. Past issues are also available.

Some of the highlights of the Summer issue:

Enjoy!
Posted by cherylb at 9:23 AM No comments:

The state legislature's Joint Committee on Finance today approved (16-0) using $22.9 million in federal economic stimulus funding for the Broadband Technology Opportunities Program (BTOP) that will expand fiber to 385 libraries and 82 schools. In addition to approving the use of federal dollars, the motion required the Department of Administration to provide additional information to Joint Finance by September 1, 2010: the sources of the state match of $5.7 million required by the fiber grant, the status of a contract extension between the state and BadgerNet providers, and an estimate of the cost to educational agencies and the state's universal service fund for Technology in Educational Achievement (TEACH) programs for the current and next biennia.

In recent weeks, WLA had asked members to contact state legislators to encourage the DOA to extend the BadgerNet contract through 2016. WLA also urged Joint Finance to approve the use of ARRA funding for the broadband expansion project. Thanks to the many members who responded to this call to action.

The Legislative Fiscal Bureau Analysis of this issue can be found at http://www.legis.state.wi.us/lfb/Section1310/2010_06_23_JFC_Broadband.pdf
Posted by Unknown at 1:08 PM No comments:

Following the retirement of Phyllis Davis, director since January 2006, Martha Van Pelt will be joining the South Central Library System in Madison as the new director later this summer. According to an announcement by SCLS, Van Pelt has 28 years of library experience, primarily working in public libraries. She has been the director of the Walla Walla (Washington) Public Library since 1997. She has been an active leader in WALNET, an automation consortium in the Walla Walla area. She is a proven fundraiser and strong advocate for libraries. WLA extends a warm welcome!
Posted by Unknown at 3:41 PM No comments:

NPR Covers Challenges for Libraries in the Digital Age

National Public Radio reports on the study by the Bill & Melinda Gates Foundation and ALA that describes the challenges facing libraries in an time of decreased funding while demand for services, particularly high speed Internet, are growing.
Posted by Unknown at 3:29 PM No comments:

The Oshkosh Northwestern - Surveillance video from Neenah Public Library was used to determine the identity of a known sex offender, who was arrested by Neenah police in May and banned from the library shortly thereafter. State law was changed in 2007 to allow public libraries to share surveillance video with police without a court order when criminal activity is suspected.
Posted by Unknown at 4:06 PM 2 comments:

In the "Quirky Blog" category, the Library History Buff blog, by Larry Nix, earned second place in the Salem Press Library Blog Contest. We think "quirky" is a compliment, and Larry seems to agree, saying, "Hey, "quirky" works for me." The blog was also mentioned in the blog LISNews as one of "10 Librarian Blogs to Read in 2010."

Larry also blogs at the Wisconsin Library Heritage Center, which he created and tends and the WLA Foundation is proud to support.
Posted by Unknown at 3:36 PM 1 comment:

WLA has respectfully asked the Wisconsin Department of Administration (DOA) to grant a 5-year extension of the contract with the Wisconsin BadgerNet Access Alliance because it is critical to the completion of the federal BadgerNet Fiber Grant and will ensure that our libraries and schools have the bandwidth they need at an affordable price.

WLA asks you to read the background information and write to your State Senator and Representative as soon as possible. Copy Governor Jim Doyle on your letter. Be sure to personalize your message with local examples of the need for and benefits of additional bandwidth in your area. In other words, describe how your legislators' constituents will benefit from this grant. More information on the grant is on the DPI website at http://dpi.wi.gov/pld/arrabbfunding.html.

To find out who your legislators are, go to http://www.legis.wisconsin.gov/w3asp/waml/waml.aspx and type in your address. Governor Jim Doyle's address is 115 East State Capitol, PO Box 7863, Madison, WI 53702. Send your letter today if possible.
Posted by Unknown at 1:43 PM No comments:

“Kris brings a lifetime commitment to the public sector and broad-ranging expertise to bear on her work as policy director,” Lawton said. “I am honored to have her help, and look forward to our collaboration in service to the people of Wisconsin.”

Wendt most recently led the Rhinelander District Library as Executive Director from 2003 to 2008, where she focused her work on strengthening community outreach programming. During her tenure as Executive Director, the Wisconsin Library Association named the Rhinelander District Library as its “Library of the Year” for exemplary outreach to community members of all ages.

Wendt serves on the Wisconsin Humanities Council, the Council on Library and Network Development, and the State Superintendent’s Advisory Council on RuralSchools, Libraries and Communities.

In 2003, Lt. Governor Lawton tapped Wendt to serve as a core convener of the Northwoods Regional Solutions Network of Wisconsin Women Equal Prosperity, her groundbreaking economic development initiative to improve the status of women in Wisconsin.

Wendt earned a B.A. from Carroll College and a M.A. from the University of Wisconsin – Madison.

An article from Rhinelander Daily News about Kris's appointment.
Posted by Unknown at 12:15 PM 1 comment:

Olson was named Interim Dean after current-Dean Johannes Britz took the position as Interim Provost and Vice Chancellor for Academic Affairs. She has served as Associate Dean since 2007.

As an academic, Olson has already brought an abundance of esteem to SOIS. Her research in cultural representation in subject headings is praised as being seminal in the field especially her 2002 book The Power to Name: Locating the Limits of Subject Representation in Libraries. She also serves on the editorial board of two prominent library and information science publications, Journal of Library Metadata and Knowledge Organization.
Posted by Unknown at 4:41 PM No comments:

The Wisconsin Library Association engages, inspires and advocates for library workers and supporters to improve and promote library services for the people of Wisconsin.

With about 2,000 members, WLA is the largest library-related membership organization in the state. If you would like more information about WLA, check out our website. Subscribe to this blog, or sign-up for our Action E-List to get legislative alerts.

You can provide important financial support by joining WLA or contributing to the WLA Foundation,