skip to main | skip to sidebar

Tasha explains Library 2.0 for you 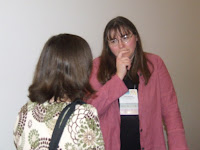 Essential elements of Library 2.0, on the other hand, include:


She discussed the concept of radical trust, which she said forces acceptance and tolerance. She challenged us to reach out and try to "radically trust" our most irritating, cringe-inducing patrons, hard as that may be. Chances are those people will surprise us, and they may just have the most useful suggestions.

One way to encourage skeptical or reluctant library employees to embrace change is to provide them ample access to technology, and to provide time for them to play with it. Menasha Public Library employees are encouraged to blog and IM each other to communicate, and all are invited to publish on the library's website.

To those who say they just don't have time to experiment with Library 2.0 or learn new technological tools, Tasha says that's only acceptable if you don't care about serving your patrons. We have to meet them where they are, she said, and right now they are already all over the web, leaving some of us behind.

"We promote lifelong learning for our patrons, and we must embrace it as well."

After the session Ms. Seacker consented to a brief interview, which I've posted below. If the video doesn't work, that's either because Google Video's publishing time delay is still in place or (more likely) I missed a step in my uploading process.

Some of us need more time to play than others.

Posted by Nanette Bulebosh at 2:17 AM

The Wisconsin Library Association engages, inspires and advocates for library workers and supporters to improve and promote library services for the people of Wisconsin.

With about 2,000 members, WLA is the largest library-related membership organization in the state. If you would like more information about WLA, check out our website. Subscribe to this blog, or sign-up for our Action E-List to get legislative alerts.

You can provide important financial support by joining WLA or contributing to the WLA Foundation,